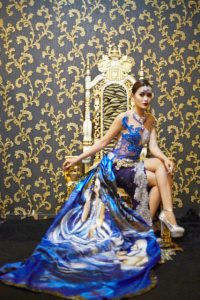 Fashion designer Shinta Chrisna had a fashion show displaying the latest models depicting the characters from story of Mahabharata. The Fashion show took place during the Sanur Village Festival, on August 23, 2014. Cece from LV C&C Model Management created choreography and music for this event.

For this collection Shinta Chrisna tried to design kebaya* with asymmetric patterns, inspired by traditional Indian clothes – Sari.
For the character of Goddess Ganga, designer used blue, white and silver colors. Blue representing water, while white and silver represent purity.
Even the collection is inspired with Indian culture; designs are made using local materials and original Indonesian motifs. Eleven women models represented designs, and each of design had painted parts depicting the fragments from Mahabharata. 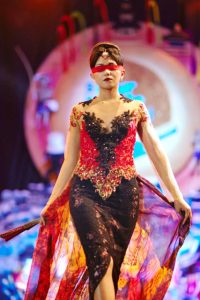 The understanding of the story of Mahabharata is very important for this collection. Shinta Chrisna saw that in human nature there are a lot of vices represented by Kurawa, and only five goodness’ represented by the side of Pendawa. In the life of every human being there is inner battle between good and evil. In designing kebayas Shinta Chrisna always uses noble qualities of Indonesian women. 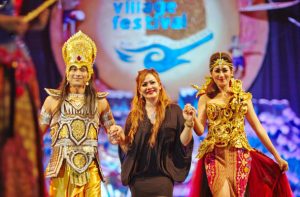 Shinta Chrisna is a professional artist and fashion designer, born in 1981. Since early age tailoring was a pleasure and hobby for her, having her mother who liked to sew as a role model. From that point she grew up to become a professional, making a move into the field of art and fashion design in 2003. In 2008. She founded Shinta Crisna Kebaya Boutique where you can find her works. It’s situated in WR Supratman street, number 279, Denpasar, Bali.

*Kebaya is Traditional clothing used in Indonesia, mostly on the islands of Sumatra, Java and Bali. There are a lot of varieties of Kebaya, depending on the material, colors, and models. In Bali is worn for the religious ceremonies and important events. Kebaya is worn as a top part of the clothing, combined with kain, sarong, which colors and patterns differ from island to island.